Autumn Term coaching for juniors starts on Monday 2nd September and takes place at Cheam LTC, Peaches Close, Cheam. Sessions are run on weekdays after school from 3:30 pm, and from 9 am on Saturdays. The coaching is provided by Ace Amit Coaching – please phone Amit Mohindra on 07947 408901 before visiting, in case the session you require is oversubscribed.

For full details of the programme, follow the link to Cheam LTC Junior Coaching.

We have bespoke tennis floodlights on all 5 of our courts, allowing play until 10pm.

Floodlight tokens can be purchased from the Cheam Sports Club bar staff.

Camps are for 5-16 year olds of all levels, but children are split into different groups according to age & ability, each with their own coach

For full details of the programme, follow the link to Ace Amit Coaching.

On a glorious sunny morning the men’s 5th team of Plamen Zaychev, Richard Bennett,  Jonathan and Michael Holding, played Sanderstead 4th. This is a regular fixture over the last few seasons and another close match was expected.

Michael and Plamen have played all in the matches this season but this was their first partnering each other and they made a strong partnership with some heavy hitting from the base line in both their rubbers to win in a relatively comfortable manner. By contrast Richard and Jonathan took a bit more warming up to get into their stride with both rubbers going to 3 sets. They finally won a tense final championship tie break to give Cheam a 3-1 win. This puts Cheam in 3rd place in the league with one match to go, which they could end in joint first place if they win their last match against Purley away.

This was Michael’s last match of the season before going off to university, so we will have to wait til next Summer before getting his services again. Anton will be partnering Plamen again in the hope that they can get another win – which would raise Plamen to number 1 ranking player in our league.

If any club players reading this, feel that they have untapped potential to play in a team this winter (I heard that we will get a mild winter this year), please contact either Simon Burgess or the team captain of the 5ths Jonathan Holding. Other team captains are available.

Cheam Mens Aegon Team entered this season in Division 5 West against old rivals Camberley LTC on our own turf (literally). Having played them many times we knew what to expect and sent in Simon, Mike, Dom and new member Kim for the opening singles matches.

Simon played young 5.1 rated Barnaby on the clay up first. Both players enjoyed hitting a hard ball but it was Simon that found the court more often, notching up a 6-2, 6-2 win on a surface Barnaby was unfamiliar with being a hard court player. 1-0 Cheam!

Meanwhile also on clay Mike was playing Steve (also a 5.1 rating). Despite landing heavy serves Steve couldn’t cope with Mike’s consistency and angles and after little more than an hour Mike came away with a comprehensive 6-1, 6-3 win.

Over on the astro Dom was the traditional ”epically long match that everyone else has to wait for to finish” that we always seem to get! He started off like a rocket going up 5-0 before losing 3 games and facing 2 break points for Sacha to get the set back on serve. Dom did eventually come through that set 6-3 but it was Sacha that stormed ahead 4-1 in the second only for Dom to peg it back and force a tiebreak. From 5-0 down in the breaker Dom very nearly regained control but lost 7-5. The first Match tie-break then decided the tie with Dom sadly being edged out 10-8 giving Camberley their first win. A decidedly nervy (and long) affair.

Kim had been playing next door and put in a great effort in the second set before narrowly losing it and the match 1-6,5-7. This meant after singles it was honours even 2-2.

Onto the doubles with Mike partnering Kim playing their second pair and Simon partnering Dom for a clash with their top pair. Mike and Kim were given a walkover owing to Steve picking up an arm injury so it was left to Simon and Dom to bring home the win or be forced into a 3-3 situation whereby more tiebreaks would be needed.

Given Dom played for 2 1/2 hours he was looking for a quick match – which he didn’t get. In the end the doubles lasted 2 hours with Simon and Dom prevailing 6-4, 6-7 (5), 10-2 saving their best for last to win 10 straight points in the final breaker including a sliding backhand winner that Simon was deservedly very pleased with at 6-2 up.

Overall then a fine start to the season with a 4-2 win. Banstead will be the next match so good luck team and great play so far!

The club’s Wimbledon ticket draw will take place on Saturday 5th May 2018, at 4 pm.

To be included in the draw you must fulfil all the following criteria:

You will have until 10 pm on Sunday 6th May to accept or your tickets will be allocated to the next name on the reserve list. They will also then have until 10 pm the following day or the next reserve will be offered them and so on.

Once accepted the LTA will contact you with a deadline for payment. If you miss this you will lose the tickets and the LTA will reallocate them. We can do nothing about this.

Congratulations to David Bawden and Rainer Zimmann for winning the Higgins Doubles Final. This was a game of two halves – Bryan Nielsen and Peter Jones got off to a great start winning the first set, but David and Rainer fought back to take the second set and then clinch the Championship tie-break. 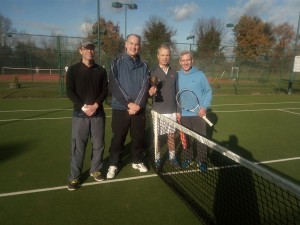 Congratulations to Oli Moore for winning the Handicap Singles Final.

Oli beat Josh Marshall 6-4, 6-4. Both sets went to 4-all after several breaks of serve, after which Oli managed to hold and then break to take the two sets.

Both players played off scratch. 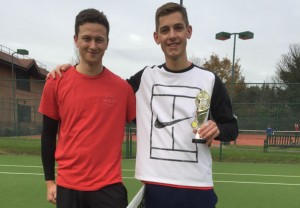 Tickets are available now from bar staff. Price includes a pint (or a glass of wine), buffet, music, count-down at midnight and fireworks on the big screen. All for £5 !!!

The Christmas American Tournament is on Sunday 17th December, 10 am to 2 pm. All members welcome. Enjoy bracing doubles tennis, warming mulled wine, and mince pies! All for £5 ! Festive wear optional, e.g. Santa hats and tinsel on your racket. And you are welcome to join us in the bar afterwards. The sign-up sheet is in the hut. 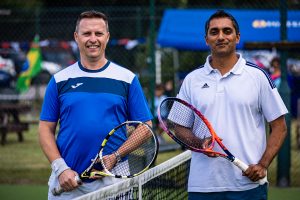 Come and play tennis at Cheam LTC this year!

Remember to use our court booking system before coming down! 🎾

No booking, no playing! This enables us to control the numbers at any one time at the club. 💪

We are delighted to announce that Cheam LTC has been reopened for members to enjoy tennis again!

An email has been sent to members outlining how we plan to reopen as we will need to adhere to several strict conditions. Please take the time to read the documents thoroughly before booking a court.

If you are looking to join the club, please check out our membership page on our website. ... See MoreSee Less

Happy Easter to everyone at Cheam LTC! 🐣

We hope you are all keeping well and hopefully it won't be too long until we are back! 🎾 ... See MoreSee Less